Cooks River Alliance Chair and Inner West Mayor Darcy Byrne says local councils have been doing their best to restore the Cooks River after 150 years of destructive management from all levels of government.

Mayor Byrne says funding across all levels of government is needed to bring the Cooks River into line with a growing number of successful urban river restoration projects taking place around the world.

“All of the Alliance member councils – Bayside, City of Canterbury Bankstown, Inner West and Strathfield – are ready to go with millions of dollars’ worth of costed, shovel-ready projects for a healthy Cooks River which means a healthier Botany Bay.”

“The projects have two primary focuses. Firstly, to slow down the volume of untreated stormwater and pollutants entering the river system and flowing into Botany Bay. Secondly, to restore the Cooks into a local waterway that looks and functions like a living river.”

“We must do more as a collective group to rehabilitate water quality and biodiversity in the Cooks River. All parties need to commit to funding and action to bring the river back to life,” Mayor Byrne said.

The Alliance is also calling on State and Federal Governments to develop Water Sensitive Urban Design policy in line with other State jurisdictions and international leaders in this space.

The Alliance and its member councils are working closely with the Cooperative Research for Water Sensitive Cities (CRC for WSC) to implement such policy in the catchment by focusing on best practice development of the Sydenham to Bankstown corridor.

“There are a number of large international cities that are now tearing up concrete and putting in new green environments to improve the health of local waterways. This is being done across Singapore, Seoul, cities in the US and in England,” says CRC WSC National Engagement Manager Jamie Ewert.

“This shows that communities are now recognising the value of waterways in urban areas and realising that things need to change,” says Ewert.

Ewert says the same can be done for the Cooks River.

“This would involve connecting the urban areas in the catchment back to the Cooks River with green links along streets, parks, and other urban spaces,”

“It is also includes managing water – particularly stormwater and flooding – within these urban areas to support the green areas,” says Ewert.

“The outcome would be a community that is more connected to the Cooks River where you can enjoy the riverbanks and actually get in the water one day. The Cooks River could become a key recreational asset.”

Read the full set of CRC for WSC fact sheets with strategies for restoring urban waterways. Extracts published below. 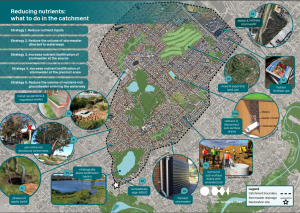